In Search of Selfie Arrivederci Shanghai 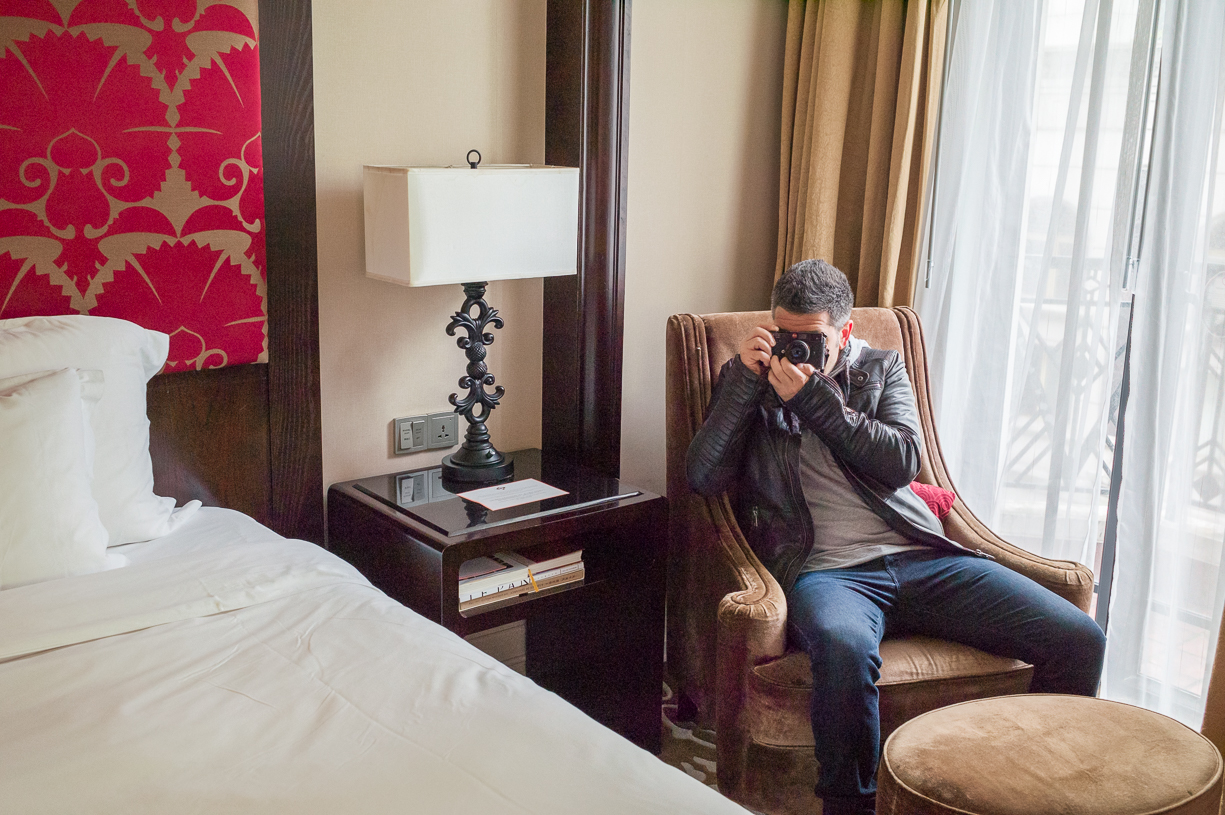 I started the day thinking that I had wished that I had just spent one day in Shanghai and an extra Night in Beijing, I was tired of being asked to go for a massage every 5 minutes, I felt ready to go home, I was missing my dogs, it had been raining the day before and I couldn’t find any motivation to take pictures or a selfie. I was very aware that I hardly shot any film and really had hoped to shoot more, I’ve got 15 rolls left. Today I was being picked up by a friend of a friend at 1.30, I was worried that I was going to be terrible company so to try and change my mood I decided to take some more pictures at the Bund with the 18mm. I walked down and I took another photo of the view, as I looked around there was a sea of people taking selfies with the back drop and I just didn’t find it in me to speak to anyone. So I  headed back to the hotel, it was in the room that I had found some peace with myself in setting up a shot with no one around, pressing the timer and rushing to the chair for a quick pose. At 1.15 my friend  arrived I was being surprised with a visit to a town called Zhujiajiao, it was such a treat, an old tradition Chinese village situated over a canal, it reminded me of Venice and how this time last year I was there. It was really pretty and also very peaceful, it was probably just what I needed.  My friend lives in Shanghai with her with her family, I know how busy she is so a real treat that she could spare the time to show me around. It was really nice just walking over bridges and just being at peace, but I had regretted not taking my tripod, my selfie urge was coming back but carrying the tripod  can be a bit of a pain sometimes. We ended up drinking coffee in a really cool coffee shop and sat on the balcony chatting while over looking the water. It was great having someone real to chat with other than a random stranger and we spent the afternoon talking about life and her memories of the UK. We then decided to have a quick bite to eat before heading back. The traffic is really heavy going into shanghai so I was dropped of at the underground which is a lot quicker.  I have never used the underground here so I was in a way looking forward to the new experience. I went down and I needed to buy a ticket from a machine and everything was written in Chinese so I really didn’t know what to do and started to get a bit worried. I asked the guard but they couldn’t understand me then a voice from a stranger behind me said can I help you please, and I was relieved that someone could assist me. Peter showed me what to do and then showed me which train to get on too. Peter is a robotic engineer, very cool,how amazing is that. I decided being my last night I should go and take more pictures and I should visit the opposite side of the Bund but unfortunately I was a little too late as the lights were going out. I had been told about a Jazz club called the Cotton Club, so I grabbed a taxi and headed there. It was rammed and this time I had my tripod with me which in its case looks like an instrument. I could feel eyes on me all night waiting and watching to see when I was going to go on stage. I felt like a celebrity, every time I lifted my head I could see fingers pointing at me, people talking and giving me an approving nod, it was such a good feeling, I was enjoying this approving cool status that my tripod (surprise instrument) had attained for me that I decided not to ruin anyone’s expectations and it stayed in its case all night. I had taken a really old 50mm lens with me which stops down to 1.4,  I  wanted to try and shoot with available light. ISO maxed at 2500 which on M9 is really noisy but I’m getting more and more comfortable using high ISO  and just don’t care, I’d rather get a shot than not. Friday morning 6am woke up and I panicked thinking I’ve not taken any selfies, I threw everything into the suitcase, grabbed my camera and tripod and went to breakfast and my first victim was the chap that brought me to my table. I then rushed my food and headed for check out and another selfie opportunity. I then looked at the doorman and thought, let’s not get desperate, let’s finish off with the guy at check out and call it a day. When you shoot street your at ground level and my first impressions may have been a bit harsh, there’s a lot more to Shanghai than I initially imagined and when you start unravelling it’s layers, it starts to get under your skin, so “arrivederci” Shanghai, I’ve had a great time and I want to get to know you better so maybe one day we will meet again.