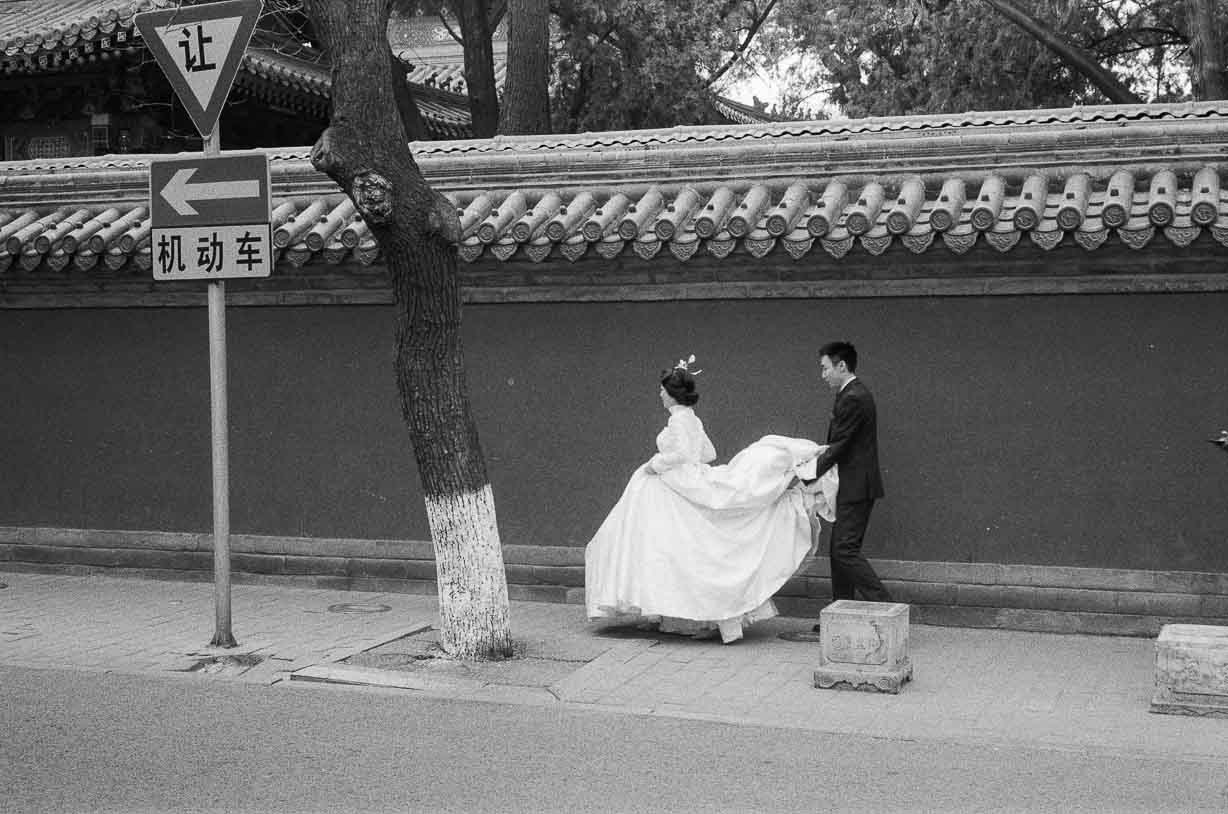 I have just picked up the film I had developed at Bayeux. The majority of the images I took are disappointing. I have recently started using the Leica M6 and the metering feels slightly different to my usual camera. I was a bit off on exposure and also my framing was terrible but there are a few I am relatively happy with. I predominantly shoot digital for ease but I love to take a few film photos,  there is a quality that just feels slightly poetic and nostalgic. So I have put together a few images and the beautiful poem Travel by Robert Louis Stevenson. I feel like I need to be at the departure gate again. My lead Photograph was of a young young couple on a  wedding photo shoot, they looked so in love and filled with excitement for their future and I managed to catch a photo without the photographer and his assistant. It almost feels quite natural as he carries the bottom of her dress. My final photo is of the monks. I was actually focusing on the guy with the glasses, he leaned forward as I pressed the shutter and the monk behind gave off a big smile. Even though out of focus his face seems to dominate the image and shine through. There was something about his smile that just gave comfort, as if he knew the secret to life. From Child’s Garden of Verses Where the golden apples grow;–

Where below another sky

And, watched by cockatoos and goats,

Where in sunshine reaching out

Are with mosque and minaret

And the rich goods from near and far

Hang for sale in the bazaar;–

Where the Great Wall round China goes,

And on one side the desert blows,

And with the voice and bell and drum,

Cities on the other hum;–

Where are forests hot as fire,

Wide as England, tall as a spire,

Full of apes and cocoa-nuts

And the negro hunters’ huts;–

Where the knotty crocodile

Lies and blinks in the Nile,

And the red flamingo flies

Hunting fish before his eyes;–

Where in jungles near and far,

Lest the hunt be drawing near,

Or a comer-by be seen

Swinging in the palanquin;–

Where among the desert sands

All its children, sweep and prince,

Grown to manhood ages since,

Not a foot in street or house,

Not a stir of child or mouse,

And when kindly falls the night,

In all the town no spark of light.

There I’ll come when I’m a man

With a camel caravan;

Light a fire in the gloom

Of some dusty dining-room;

See the pictures on the walls,

And in a corner find the toys

Of the old Egyptian boys”