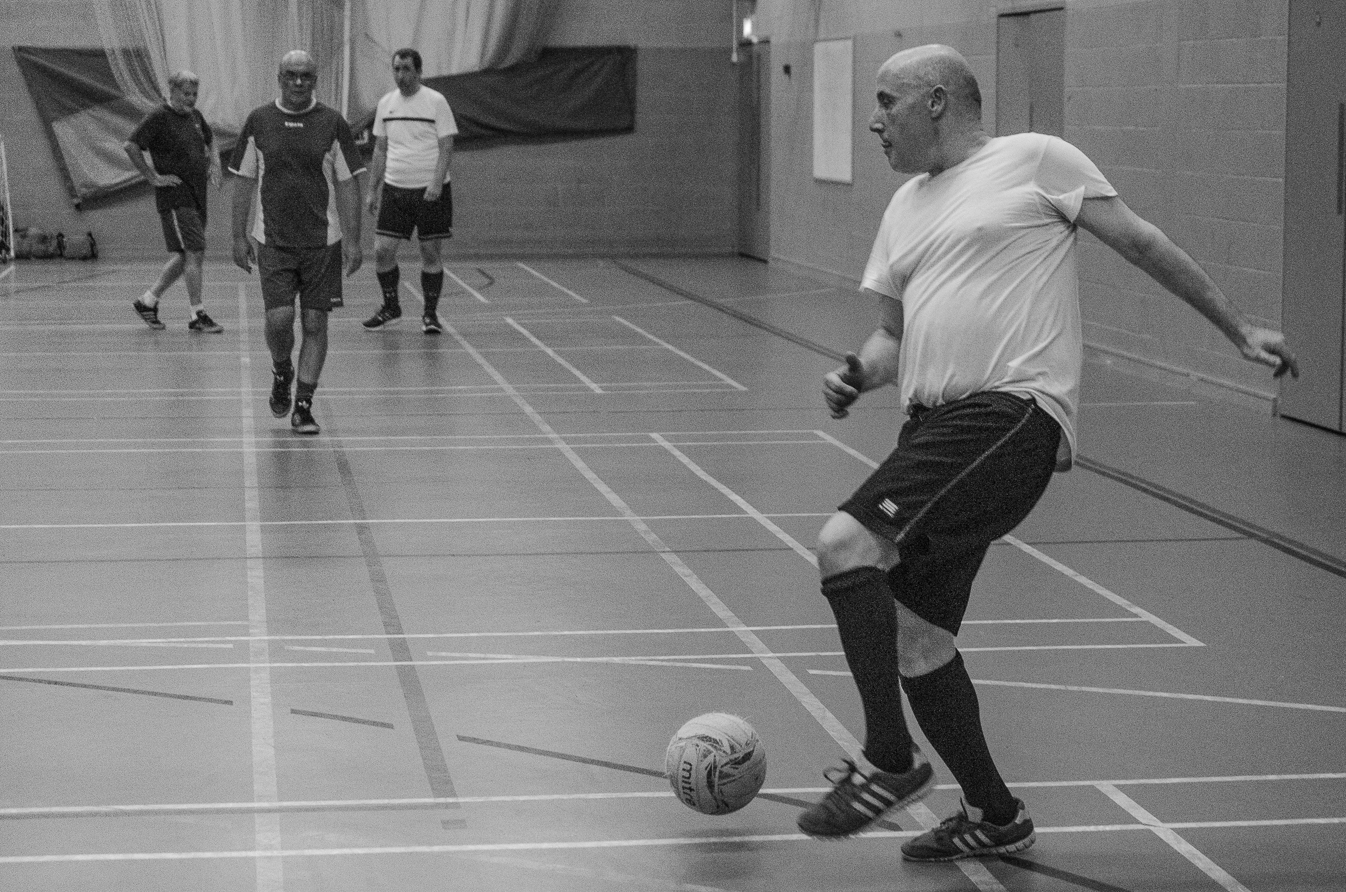 It’s all kicking off in Hornsey, Monday nights 7-8pm, as a group of 60 somethings get together for a 5-a- side indoor football and I had the opportunity to go along and take some pictures.

Panic, Leica M9 for sports photography Oucch and also indoor with poor lighting. But at least let’s give it a go.

I decided to make life easier as on both cameras I set to auto ISO – I was keen on keeping my speed at 200 plus if possible. The Leica M9 had an old Summulux 1.4 and  I set to max ISO 2000. The Nikon set to max which I believe is 3200 and again speed of 250 with an f stop around 6, I also set to continuous auto focus.

As the guys started warming up I started firming a few shots, Nikon was relatively easy to work with and I just had to chase the action. Not really to sure what the results would be but definitely easier to use.

Far from feeling awkward, the Leica actually felt quite instinctive. It was a very different way of shooting but it’s a style I enjoy; you wait, you watch you pre focus or try to fast focus; you pan, it’s exciting but extremely difficult to catch a classic ball flying through the air or a cool action shot.

Straight after the event I rushed home to download the images thinking the auto focus Nikon would be a hands-down winner and to my surprise I was realatively pleased with the way the Leica performed. Obviously a lot harder but when when I nailed the shots they were really nice with the a classic Leica rendering and the feel was different to your typical spray shot, I was also shooting wide open at 1.4 which resulted in lots of out of focus shots but the ones I managed to catch melted the background softly and beautifully.

If this was a paying event I would probably have rented a Nikon d4/5  which I know would have given amazing low light performance and also the possibility of greater depth of field. I would have caught the action with super sharp focus but for fun I was happy with my Leica and also pleased with the results.

Enough about the cameras and more about the guys, an amazing group who have been meeting for an hour of footy for around 40 years. Peaking at age 76, they are mainly in their sixties, with a couple of ‘youngsters brought in the give the evening some pace.

In the words of Wham : “Young guns having some fun; crazy ladies keep the on the run. And at 8pm sharp the ladies netball group sent the guys packing.